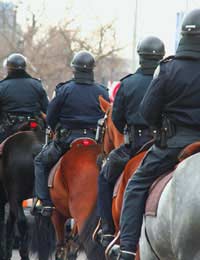 The majority of horses that are ‘on duty’ in the UK these days are police horses or members of the Queen’s Household Cavalry or Kings Troop (not forgetting the magnificent Windsor Greys!)

Whatever duty the horses are on, their breakfast is always ready at 6 o’clock in the morning. Their rider grooms and tacks them up for the day’s work, which could be anything from patrolling the city streets, to crowd control for a sports event, escort duties, or public relations exercises at a school, for example. Depending on how far away the duty patrol is, the horses are loaded into a horse box in preparation for work and, with all the pre-duty checks done, driven to their day’s destination.

Once they reach the starting point of their patrol, the horses are sent off in pairs with their riders. Young and less experienced horses are worked with older police horses that have done the job for years. This helps the younger horse to remain calm and confident in unusual situations. For their protection in potentially dangerous situations, police horses are issued with their own sort of uniform of:

They also have high-visibility worksheets, reflective bands on their legs and flashing lights to wearin other circumstances.

The normal length of patrol duty is 5 hours. Ridden at a lively walk for this length of duty means the mounted patrol covers around 30 miles per duty, but this depends how many times they get stopped and patted by members of the public! When the pairs of horses on duty are called to respond to urgent calls, they can move a lot faster and quickly cover the ground at a trot or canter, depending on conditions underfoot. At a gallop, police horses could approach 30 miles an hour, for short bursts. They are not racehorses; but built for comfort instead!

While on crowd control duty, the pairs of horses work together to ‘direct’ noisy crowds of people. At football matches, for instance, there is usually a strong mounted police presence as unpleasant situations on the ground can escalate into public disorder very quickly. This is where the horses training in lateral work (going sideways) really helps. On instruction from their riders, the horses can gently push the crowd without treading on anyone’s feet, as they move slowly but surely sideways.

The horse is less likely to be injured this way too because it is a gentle but firm movement that doesn’t panic people. This is also an instance when the experience of an older horse can help a younger one, as these situations are noisy, colourful and quite an intense experience for the animals to deal with. By this stage, though, they will have established a strong bond with their riders and trust the decisions made by him or her.

The oldest and most senior regiments of the British army are the Life Guards and the Blues and Royals of the Household Cavalry. The mounted regiment carries out ceremonial duties on State and royal occasions such as, the Queen’s birthday parade, when they provide the Sovereign’s Escort and during State Visits. They are also famous for their daily Changing of the Guard duties. The troops who ride these highly trained horses are combat-trained soldiers and act as a military reminder to the service that began in 1652. Horses of the Life Guards served at Waterloo, in both World Wars and more recently in the Middle East, Asia and the Persian Gulf.

On duty, the 240 ‘Cavalry Black’ horses, 14 greys and 4 drum horses, can excite and humble crowds with the magnificent pageantry and displays of teamwork that horses and riders of this ability achieve.

Some of the duties are gruelling, like standing completely still on sentry duty for stretches of 2 hours at a time, whatever the weather. Others, exciting public performances at national shows, for example, where teams of horses race with cannons in tow. One of the dark horses may perform the ‘lie down’ exercise of the troop; this was used during battle. Scouts would ride the horses as far as they could into enemy territory then instruct them to lie down, whereupon the horse would ‘disappear’ into the undergrowth and wait.

They get used to noisy crowds, pomp and ceremony, regimental bands, all traffic, bright lights, aeroplanes overhead and cannon fire. As well as all that, they carry the mounted duty man, who, when in state kit, plus their own horse furniture can weigh up to 20 stone!

Retirement for all these dutiful horses is well planned and well deserved!

Working for a Hunt

Run your own Animal Shelter

The Working Life of Sheepdogs & Gundogs

What is Animal Assisted Therapy?