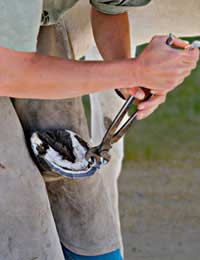 Picture any historical rural scene: it would appear incomplete without a village forge and the sound of hammer on anvil, ringing out. Now imagine the physical build of that man, wielding the hammer for hours on end, in the heat and smoke-filled forge. For all his apparent strength, the character in mind is a patient and gentle type, with an understanding of horses and a genuine concern for their well-being.

The farriers of today lead a very different life to that of their predecessors. The mushrooming of livery yards, riding schools and competition yards, demands that today’s farrier covers a larger area and visits more animals.

Mobile forges mobile phones, 4x4s and the availability of factory-made horse shoes make farriers far more accessible.Ben starts his working day at 7am by first visiting his forge, where the different sets of shoes required for animals on his list are prepared and loaded onto the ‘van’; along with all the routine tools and equipment.

His dogs, Fly and Whisper, go with him most days. The majority of farriers’ work alone so the company of their dogs is always appreciated-and the dogs get to chew on hoof trimmings and enjoy many varied walks!

Today Ben has four horses to shoe at a livery yard, two donkeys to trim at a family farm and one appointment-at an equine veterinary clinic-to fit remedial shoeing for a pony that has been treated for a serious injury.

His first stop is about eighteen miles away from the forge and one of the horses, a large Dutch Warmblood, does not have good manners so can be very hard work! Ben prefers to get him done first.On arrival at the livery yard, Ben thinks it’s going to be one of those days; there is nobody about and it looks as though his clients’ horses have been turned out into the paddock.

“Most people are well-organised and considerate; they have their horses in, ready to be shod. I even get a cup of tea and a biscuit at some places.”

“There are times, though, when people have forgotten to check the yard diary, or something has happened to detain them. When this happens on the first appointment of the day my heart sinks because if I’m late starting, I’ve got to let my next client know I’m running late and I can’t make up the lost time. I generally allow for one hour per horse-and that’s if everything goes smoothly!”

Without too much time lost, the livery yard owner appears and sends stable-hands to catch the horses that are booked for shoeing today.

Ben has his apron on, mobile forge and tools ready to get on with the job and once the Dutch Warmblood is calmed and not leaping about everywhere, he is shod successfully and no-one is trodden on; this time. Fortunately it is a straightforward removal of old shoes, trimming and rasping of hooves and fitting of new shoes.Having ‘phoned the next client to say he’ll be about thirty minutes late, Ben stops off to give Fly and Whisper a run en route and enjoy a well-earned cup of coffee from his flask.

The two donkeys are tied up in the yard ready when Ben arrives at the family farm. There is a small group of school children waiting to watch the farrier at work as part of their morning school trip, and their excited voices grow in volume as Ben gets out of his van.

The children watch as he trims and rasps the dainty donkey hooves-then groan in disgust as Fly and Whisper are let out and head straight for the chewy hoof trimmings...

With a quick stop for more coffee and a home-made sandwich, Ben continues to his last visit of the day.As Ben pulls into the gravel drive, he sees that the equine veterinary centre looks immaculate as always; not a wisp of hay out of place and the muck-heap looks like a work of art!

One of the equine nurses leads out the pony in question, accompanied by the owner, and they are joined by Ollie, who carried out treatment on the pony. The shoe that Ben is fitting is called a hospital plate. Due to the pony’s injury, it will need a clean daily dressing -which the owner will do at home. Four bolts hold the plate in place after the shoe is fitted.

Ben shows the owner how to remove the plate he’s made and how to screw it back on each time the dressing is changed.Ben’s mobile rings; a race horse has cast a shoe so would he ‘pop in’ on his way home to re-fit it?When he’s finished there, Ben has paperwork to do and preparation for the next day. “Beats working indoors though!”