Home > A Day in the Life of > A Rat-catcher's Diary: Role of the Rodent Inspector 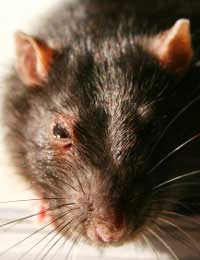 Common Rats: those long-tailed murine rodents that scurry about and make (most of) us shudder with revulsion. Rattus norvegicus in particular is just about everywhere in the world and, as a species, rats are the most significant urban and rural pests: capable of spreading diseases dangerous to humans and contaminating both human and animal foodstuffs.

It is estimated that there are in excess of 70 million rats in the UK. Females are sexually mature by the age of 2-3 weeks, can produce 8-10 young a month and live for around three years. Rats can pass 50 droppings and 12-16mls of urine in a 24-hour period and the rodents’ continued gnawing of cables is thought to be responsible for around 50% of farm fires. Adult rats can grow to the size of a small cat. They have a hairless tail that measures 150-200mm in length.One way or another, the damage caused by rats’ costs our farming industry alone between £14-18 million a year.

Sighting of a dead or live rat. For each one you see there will be at least another ten that you don’t…Gnawing: wood, plastic, any material at all.Smell: musty, ammonia-like.Droppings: 12mm long spindle-shaped.Rat runs: same routes used over and over again. Greasy dark smear marks may be visible-these are left by the repeated contact of rats’ fur on surfaces.Burrow entrances: holes 7-120mm diameter found in banks, wooden structures, walls, buildings (under sheds and decking are high on the list of rats’ favourite places.)

Who You Gonna' Call?

This ancient profession is also known as ‘Pest Control Officer’ ‘Vermin Eradicator’ ‘Rodent Inspector’ and a number of other things!

Darren is a professional rat-catcher who has worked in the business since 2000.“I used to go rabbiting when I was a lad, then worked for a national pest control company and as a bird-netter (pigeons) in London. Now I work for myself and deal with all types of unwanted visitors! I’ve nothing against rats personally; but have no problem removing them from places they shouldn’t be.”

Finding the source of burrows is one of the things Darren does on his first visit to a new client. Many of the rat infestations Darren deals with can be traced to drains in need of repair.

“If there’s a hole in or around a drain, that’s usually where the problem lies.” He recommends that people employ a builder to repair any broken-down areas and to cover drains with wire mesh.

Once the suspected rat-runs, burrows, water, shelter and food sources have been found, there are several treatments available to free the area from its rodent population.

Among the specialist treatments available to professional pest-controllers, are poison-bait traps and contact dust.

“I use peanut butter on the poison bait to attract the rats. They’re clever creatures though, if they try a food that makes them ill they’re unlikely to eat much of it again. They go back for another little nibble a few days later and the anti-coagulant in the bait builds up in their systems. That’s what kills them. Contact dust is useful for lining burrows with. The powder gets in the rats’ coats and as they wash and preen themselves they ingest the poison that way.”

Most infestations can be successfully eradicated with just two visits from the rat-catcher, within a space of one week to ten days.

Darren wears protective gloves to carry out his work and uses a facemask when powdering burrows with contact dust. He cleans his hands with anti-bacterial gel at appropriate times throughout the working day.

“Unlike other seasonal problems, such as wasp nests, flea infestations and so on, rats are a year-round problem. It is easier to avoid an infestation in the first place by managing waste efficiently, keeping foodstuffs (like chicken feed, dog food, rabbit food etc) in secure containers and, in general, don’t provide food, water, shelter and nesting sites to rats!”

A final tip if you feed wild birds in your garden: avoid over-feeding and clear up spillages from the ground. Rats love the food meant for our feathered friends…