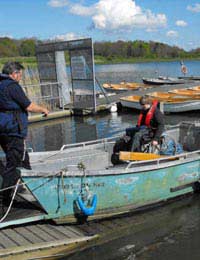 Have you heard about the one that got away? If you know anyone who has ever been fishing, you’ll also know that they have tales to tell-and there are some real humdingers when it comes to fishermen’s tales, that’s for sure!

Qualified fly-fishing instructor, David Wickens, is one of a team of three instructors/rangers that includes fellow fishermen, David Crouch and Tom Todd. They work a rolling rota between them that covers every day except Christmas, Boxing and New Year and shifts vary in length throughout the seasons.

As the area around the reservoir where they work is also a Nature Reserve-open to the public-the daily routine involves a lot more than teaching fishing.

“We normally arrive well in advance of the official opening time. The gates open at 9am; but we do various checks before then. It’s a beautiful place to work and we all appreciate that. However, there are basic chores, like emptying bins, unlocking the public toilets, checking answer-phone messages, lessons and boat bookings listed in the diary, before we start.”

“If it has rained during the night the boats that are moored on the jetty need to be bailed out. Boats have to be prepared in readiness for anglers, competitions, media days and so on. The Wheely boat (adapted for wheelchair users) has to be booked 48 hours in advance because it takes two of us to move the engine.”

Although the setting is glorious and the water looks calm, fishing from a boat is not compulsory! Many anglers set up rods on the banks with just as much enjoyment-and no motion sickness.

Daily fishing tickets are sold on a self-serve basis, but the instructors’ are on hand to help out and check that tickets and anglers/boats match up throughout the day and that there are no ‘strays’ after dusk. Lessons vary from complete beginners to experienced anglers who have, for example, been coarse fishing and want to learn the casting technique of fly-fishing.

The Art of Fly-fishing

In windy conditions, the fly (with hook) can be blown anywhere. “We encourage people to wear safety glasses and appropriate clothing. Life-jackets are supplied and must be worn in all boats. When casting on land, because the technique involves the line going back as far as it does forward, people have to be aware of what’s behind them, too!”

The imitation flies used in fly-fishing are made from the most incredible range of materials and colours (some look more like fashion accessories than hunter/gatherer gear!)

The idea of using flies is to imitate the natural prey of fish; which changes from season to season and in different light and weather conditions, hence the wide range of flies available.Flies made for fishing include imitations of:

As we stand on the bank, trout can be seen leaping from the water-this is not necessarily a show of exuberance, or to catch surface flies; it may be done to shake off leeches...David explains that instructors’ often answer questions about where the fish are most likely to be feeding in different weather conditions, which flies are most successful for the time of year-and they are expected to be able to identify the species of birds seen in and around the reservoir.

Not Just an Instructor

“We are year round naturalists! Today I saw an osprey diving for fish; which was a rare and magnificent sight. At the moment there are a few pairs of Great-Crested Grebes nesting in the reed beds-we’ll see the chicks being carried around on the parents’ backs in a few weeks.”

All the instructors undertake a yearly refresher course on boat-handling and man overboard procedures and rescue boats must be ready to go at all times. They also help their conservation department with bat newt and toad surveys-so life is never dull!David points out a man-made island-clearly visible in the water-marked by buoys as off limits to anglers.

This is where the new stock of fish is kept and can only be reached by boat. Supplied by two local hatcheries, the young fish (fry) contained there are fed daily by a member of the team before being released into the reservoir in batches over a period of weeks or months (but only when water levels, temperature and oxygenation conditions are right).

After all the anglers’ have checked out David does his evening checks-to the sounds of birdsong, wind-ruffled reeds and leaping fish. Another hard day at the office...