A Day in the Life of a Saddler 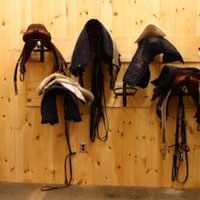 The ancient craft of saddle-making has kept up with the times; yet maintained many traditional practices. Early records of the Worshipful Company of Saddlers show that there was a Guild of Saddlers in London at least as early as 1160AD, probably earlier, which make it one of the oldest City of London Livery (trade guild) companies.

Bob has worked as a saddler for over thirty years. A former jockey, and lifetime devotee of all things equestrian, he trained as a Master Saddler when his riding career ended.

“It’s not something you just stop doing! Working with horses, in the saddle or on the ground, is a way of life not a job. I couldn’t imagine living any other way and wouldn’t want to.”

Bob has his own retail tack shop with adjoining workroom where he builds and repairs saddles, bridles, leather head collars, sets of harness and also makes his own range of dog collars and leads. He stocks a selection of well known brands of saddle and ‘off the peg’ bridles in the shop too.

“A correctly fitted saddle is not an extravagance; I would say it’s a matter of priority.”Apart from the important issue of rider safety and comfort, an ill-fitting saddle can cause serious damage to an animal’s spine. Short term use can cause a horse to develop saddle sores, discomfort and stiffness in gait and reluctance to be tacked up and/or move forward.

In Bob’s workshop there are several saddles in various stages of development along with other, brand name saddles, bridle pieces and stirrup leathers, in need of repair.

“I spend an average of four days a week in my workshop, actually making and repairing tack. Normally, one day a week is spent visiting clients’ horses to provide a mobile measuring and fitting service.”

“Then there are the local weekend events when I take my mobile tack shop. No matter how organised the competitors’ are, there’s usually something that’s been forgotten-or needs to be replaced-at the last minute! Sometimes a piece of harness breaks, a horse boot gets lost or damaged or a novice rider may have inappropriate tack for the event.”

Bob’s shop is run by a team of three equestrian-savvy sales people, including his wife, who cover the opening hours of 8:30am to 6pm, Monday to Saturday. He is then able to get on with the exacting process of saddle- making in (relative) peace, but is on hand to solve any customer queries and ‘show his face’ in the shop now and then!

This morning Bob is re-flocking the final one of three saddles for a local show-jumping yard, ready for fitting tomorrow. He’s also repairing a martingale and various other pieces of tack, and will try to fit in an hour of design time for a new range of dog leads and collars.

“I have a system! That is: I prefer to do intricate, small, stitching first thing in the morning in good light when my eyes are fresh. Then I tackle more physical jobs that also mean I get out of my chair and move about for a while-things like preparing the leather. Next, I have a different form of creative time, when I work on my own new designs.”

As with any job, there is the inevitable paperwork which has to be tackled daily. Client records, invoices, bills for materials, the shop accounts and staff wages are just part of it.

“I pay a book-keeper to do the accounts, but have to keep organised with the day-to-day income and expenditure. I hate that part!” When Bob’s working day finishes, he and his wife exercise their horses and sometimes-on a warm summer evening-join friends in the village pub for a beer on the way home.